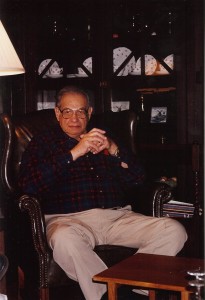 HP stands for Harry "Papa" Portner, the Grandfather of founder, Michael Malloy. Harry Portner lived in Detroit, Michigan.  His family immigrated from Russia in the early 1900s in part to avoid the persecution of Jewish communities occurring at that time.  Poor and nothing to their name, Harry's family business started from scratch.  In the following years, Harry became a successful businessman who started and developed several companies in plumbing, pipefitting, and other services in the auto industry. Today, he would be called a 'serial entrepreneur.'  He was also a man of deep faith who was very active in the Jewish community around Detriot, and it was clear that Harry's Jewish faith always motivated how he led his family and his businesses.

His success came from his fundamental business philosophy that was always to solve customer problems. When the automakers had production problems Harry made it clear he could solve the problem... even if he had no idea how he would do it. He always figured out a way. This attitude led to the development of new companies because the “solving problems” philosophy created opportunities in areas Harry would not have considered otherwise.

Harry’s daughter, Elaine, adopted Michael when she married Michael's Father. Harry would tell Michael stories about all the crazy situations when he promised to "solve the problem" and subsequently explained his business approach to Michael. Like the time an electric station overloaded and Harry's team was there on other work. Laughing later, he told his grandson how his hair stood straight up from the static electricity as they figured out what to do.   Harry's 'faith-based' life, in all matters, also impressed his grandson Michael as well.

In this way, Harry taught Michael the fundamental philosophy that has driven Michael's advising companies forward over the years, "Bring Value First" – Simply engage people to understand their situation. Bring them leadership (direction), a relationship (confidence), and capability (capacity and competency).

Michael became a serial entrepreneur through 5 businesses oriented around advising and assistance to business owners. His Grandfather’s experience and wisdom guided him throughout these endeavors. Michael bought a building in 2007 to house one of his companies and in honor of his grandfather he called the building's holding company LEGACYHP... in honor of Harry. Michael saw it as a private gesture of respect and honor, but also figured it would never be publicly used.

Fast forward to 2014-15 and Michael's advising business reached a transformational moment that culminated years of experience combined with a deep, Christian spiritual awakening that formed his new sense of purpose. Changed from being a consultant, he realized he was an adviser, mentor, and advocate.  He had become a business adviser and financial strategist to business owners and a Certified Exit Planner.

So, his company Business Beyond Borders, which provided international business and business development, services was evolving rapidly and his colleagues told him, "Michael, the name no longer fits what we have evolved into doing 24/7. You need a new name."

Michael contemplated prayerfully about this for a while. In a moment of clarity, it struck him. The name he used in 2007, as a private recognition to his Grandfather, was actually the foretelling of what his mature business would become and be.  It was a small but important sign that he had confirmed the purpose of his business to work intentionally with its business owner clients.

Michael now realized that LEGACYHP was the right name for the last company he will lead and grow for the next 25 years.

What I do… is get people to do… what they don’t want to do… to be what they want to be.